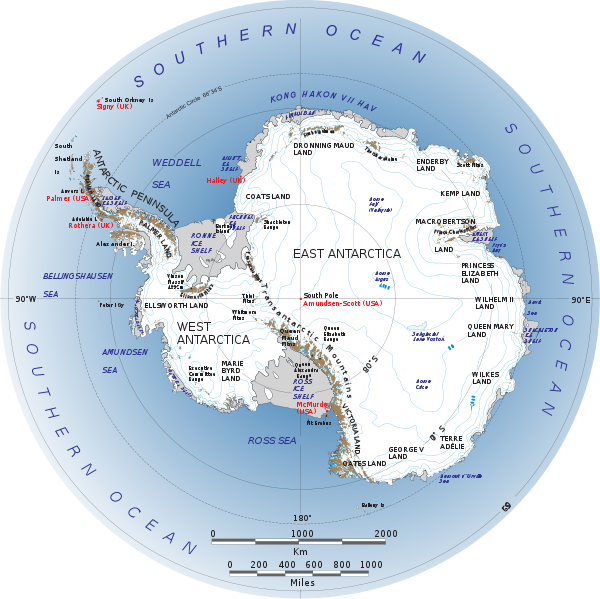 Pat Farmer just arrived at Pole.  He "ran" from the coast of Antarctica to here in 18 days.  He completed his journey of running pole to pole.  In order to train for this endurance run, he ran 2 marathons a day for a year straight.

So sorry for the lack of posts lately.  Partly I blame the satellites!  The passes just aren't convenient for when I'm off work, and not sleeping!!  Also, not too much is happening around here!  Life has become very routine for me.  Sleep, work, gym, eat.  That's it.

Last night, however, I got to do something quite wonderful!  I was invited out to our tourists campsite.  I met up with Mark Wood, Hannah McKeand, and Mark George.  They all skied here, solo.  I was able to have wine with them and chat for a few hours.  Absolutely amazing people.  They made me feel so small- and that flying to the South Pole was very normal (compared to their adventures).

Hannah had the world record for skiing from the coast to the Pole in the shortest amount of time, until someone broke her record in 2006.  She now still holds the record for skiing coast to pole the most number of times though.  She guides trips down here now.  She's so spunky and lots of fun to be around.

Mark Wood just finished skiing to the Pole, took him 50 days.  He lost his IPod on day 2, so he skied 48 days listening to nothing but his thoughts.  In a few weeks he'll be heading north to ski to the North Pole of the world.  He has also climbed Everest.

People are absolutely amazing at the World's Southernmost Campsite...... 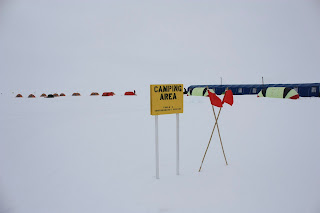 I went out to Ice Cube yesterday!!  They study neutrinos.  From their website...
(www.icecube.wisc.edu)

Neutrinos are very small, nearly massless particles that come from a variety of sources. They come from the sun, radioactive decay, cosmic rays, and violent events in the galaxy such as exploding stars. Exploding stars, or supernovas, release very high amounts of neutrinos.
Animation of a neutrino passing through the detector.

IceCube is focused on seeing high energy neutrinos, which can help us understand where cosmic rays come from, more about gamma ray bursts and supernovae, the identity of dark matter, and the ability of neutrinos to oscillate, or change type. IceCube is a tool for exploration. Already it has changed the way we think of the Universe.
Since neutrinos have a very small mass, they are hard to detect. IceCube uses the ice at the South Pole in Antarctica to hold basketball sized detectors called digital optical modules, or DOMs. Altogether, there are over 5,000 DOMs in the ice.

It may seem strange to use the ice, but there are several reasons why it is an excellent location. First, the ice is very clear. IceCube is buried very deep in the ice, about 2000 meters or 1.5 miles. At that depth, pressure has pushed all the bubbles out, which means it is easy for the DOMs to record neutrino interactions.
Second, it is very dark in the ice. This is important because when a neutrino interacts with an atom of ice, a particle called a muon is produced. The muon radiates blue light that is detected by the DOMs. The direction and intensity of the light allows us to determine where the neutrino was coming from in the Universe.
Finally, the last great thing about the ice at the South Pole is that there is a lot of it! The IceCube neutrino detector is enormous. It uses a cubic kilometer of ice and is the largest neutrino detector in the world. 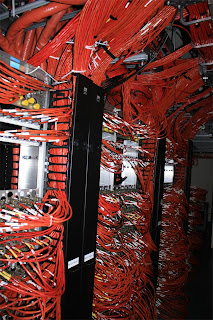 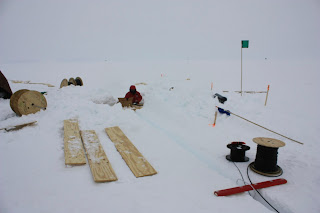 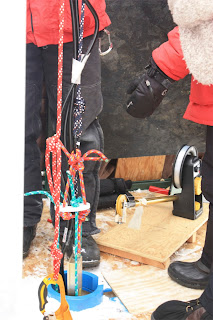 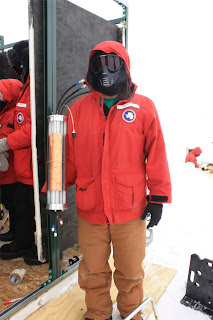 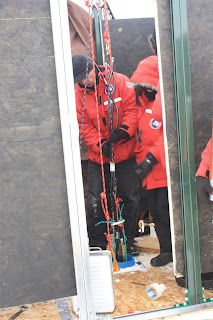 Race around the world

At the pole, every Christmas we have a "Race around the World"- since here we can literally walk through all time zones.  It was 2.3 miles, and I walked part of it, ran part of it.  We had pretty crummy weather on Christmas eve here.  The winds were blowing a good 20+, and it was something below 0.  This is me walking... It was a whiteout kind of day.. 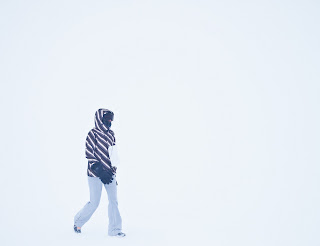 2 Hercs on the ground! 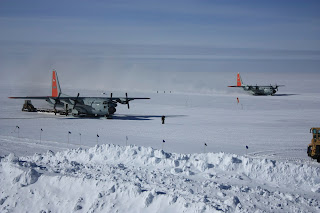 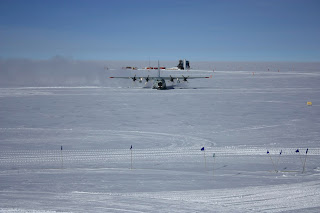 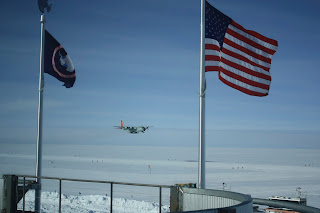 On Christmas Day, I participated in a long standing tradition.  Before the days of iridium and regular telephones, those stationed in Antarctica communicated using the HF radio.  We still have and use the HF radio in comms, but in addition to other means of communication.

On Christmas day, all of the field camps, as well as McMurdo station, get together at a designated time and take turns singing carols over the HF radio.  It was a memory from here I'll never forget.  It was especially magical this year, because the Norwegian tourists (some of those who skied to the Pole, and are now camping outside our station) came in to join us.  They sang 2 Christmas carols in their native language.

It made Christmas day for me! 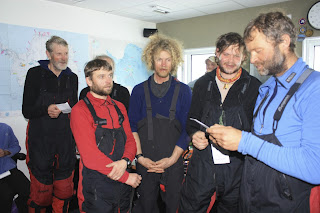 For the first time, we had a Catholic Priest at South Pole Station for Christmas.  Fr. Rossetti has been great to have here!

And the highest temperature today! 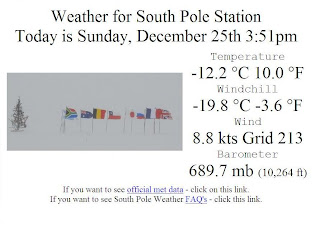